On September 8, 2015, Port Moody Council approved borrowing up to $10.5 million to repair city assets, as the repairs are deemed critical and necessary immediately. The vote was not unanimous (4:2), though all members of council agreed repairs are necessary. A fourth (and final) bylaw reading is not yet scheduled on the public agenda.

The amounts may come as a bit of surprise to some; for example, the estimate earlier this year for Civic Centre Repairs was under $4 million (now $5.2 million), and some of the other amounts have been under the radar. See extra information from past council meetings at the bottom of this post. Please also note the chart below does not include amounts for other city facilities identified in a detailed analysis in October 2013 (including, for example, Kyle Centre).

Excerpted from agenda, Item 7.3
The $10.5 Million loan will be used to fund the following capital projects:

Financial Implications (from agenda)
“The servicing on the $10.5 Million in debt is estimated to cost approximately $600,000 to $625,000 annually in debt repayments (principal and interest). The debt is proposed to be repaid over a 25-year term.

The City is planning to repurpose the $625,000 in debt servicing from the Recreation Complex debt and apply it to finance the proposed new Capital Remedial Works debt. The $625,000 in funding, housed in the Asset Reserve, represents an equivalent 1.87% tax increase. By repurposing the existing approximate $625,000 in debt service, there will not be a need for an additional debt levy (tax increase) to finance the proposed new $10.5 Million debt.”

Update: Past information presented to council

At council’s April 10, 2015 meeting, costs for the civic centre (city hall) were estimated as follows:

On October 15, 2013, a detailed city facilities study was presented at a Council Committee of the Whole Meeting. 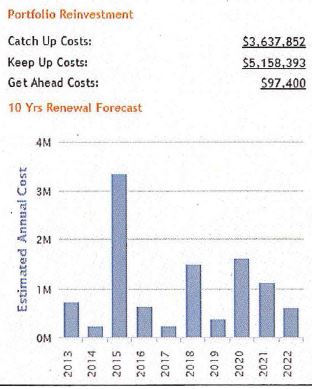 The following chart was part of the comprehensive report. To view the entire report with analysis, pictures and graphs, click here.