Public Hearing Nov. 28, 2017: Moody Centre TOD … coming to a neighbourhood near you?

Moody Centre TOD and beyond … coming to a neighbourhood near you?

Image (mock-up) below is from a Global News segment from Sept. 30, 2017: How Port Moody could have been bigger than Vancouver. Link to story and video here. 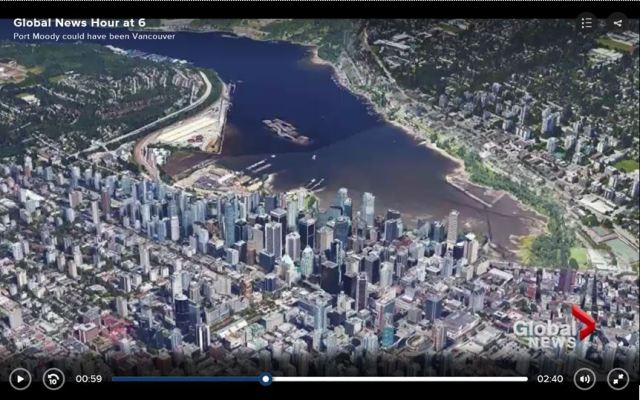 To amend Official Community Plan (OCP), Moody Centre TOD area (transit-oriented development) to much higher density, including additional ~3,400 plus residential population and towers up to 26 storeys (which could potentially be amended in future; e.g., with density bonusing). Current OCP shows building heights in the range of 4-12 storeys.

The TOD area is envisioned as mixed use, which could be “a mix of residential, retail, office, employment, service, civic, institutional, recreational, and cultural uses” (from Oct. 24, 2014 council agenda package).

Anyone wishing to comment can do so in-person at the meeting and/or in writing to clerks@portmoody.ca by 12:00 noon on the day of the public hearing in order for clerks to have material available for the start of the meeting.

TOD designation and growth
The proposed changes disregard years of public input for this area, and in six years the area designation has changed from industrial business (not residential) to something completely different. The OCP adopted in 2011 recognizes (and maps) the expected rapid transit route, so that is not something new and different, except the Skytrain route is now a reality.

The decision to label this area as transit-oriented-development (TOD) was made in Port Moody. It was not a requirement or obligation to other levels of government. The council agenda package for Oct. 8, 2013 contains a series of letters from the Ministry of Transportation Evergreen Line Rapid Transit Project about why the two stations are where they are. The Moody Centre Skytrain location was chosen because it was an existing transit hub for the West Coast Express and buses, and Inlet Centre because it had already achieved sufficient density. Port Moody was ahead of its regional growth commitments.

A common misconception is that Metro Vancouver/GVRD tells local cities how much they must grow their population. The city has certain obligations in working with Metro Vancouver as a region, but the OCP population growth estimates are provided by the city (Port Moody) to the Metro Vancouver Regional District.

Consultation
The Moody Centre Community Association (MCCA) asked for a resident-based neighbourhood consultation years ago, and was led to believe this would happen, but it never did.

In early March 2015, the city hosted roundtable discussions with “senior members of the real estate development and brokerage community in Metro Vancouver … to offer their views on Port Moody’s competiveness in attracting development, especially employment-generating.” On June 16, 2015, the council agenda included an item called Facilitating Employment-Based Development in Port Moody to report on the roundtable discussions which focussed on Moody Centre and the TOD area.

Some members of council felt those roundtable discussions could have been improved by inviting input from a broader group, such as reps from organizations that provide good quality employment. The roundtable report seemed to focus more on high-density residential development than it did on creating employment-related development.

To see more on this, including excerpts from the roundtable report, see earlier post on this site: 2015-06-13: Neighbourhood planning — Moody Centre and Coronation Park.

Colliers International provided a report dated June 27, 2016 to the city that provides an commercial analysis for the Moody Centre TOD area, and it can be accessed from the city’s TOD webpage (see link above).

More recently over the past year, the city held a couple of open houses specific to the Moody Centre TOD area with three proposed concepts for OCP amendments. The proposals all represented huge changes with much higher buildings and additional residential population (~3,400+, depending on the scenario).

Questionnaires from the open houses to obtain feedback pushed respondents to choose one of three options (as opposed to “none of the above”) resulting in the least dense option garnering the highest level of support.

There were no town halls, nor did the Moody Centre TOD concepts go to the Community Planning Advisory Committee (CPAC) for discussion, as is normal procedure. See post Council ditches pesky council-approved procedures: Moody Centre TOD for more.

Proposed, 2017:
Buildings up to 26 storeys (no guaranteed cap on height or number of buildings)
Population estimate is about 3,400

Current, from OCP finally adopted in 2015 after legal wrangle with Metro Vancouver/GVRD:
Buildings up to 12 storeys (no guaranteed cap on height or number of buildings)
Population estimate is about 2,800

OCP, 2011:  (reference copy here)
Buildings 3-4 storeys. Map below is from 2011, not current OCP. It shows the “industrial business” and “commercial mixed use” designations for the Moody Centre TOD area.

In June 2017, a Moody Centre resident spoke at council, and provided MCCA with some shadowing images. We’re not aware of any shadow studies done for, or by, the city. 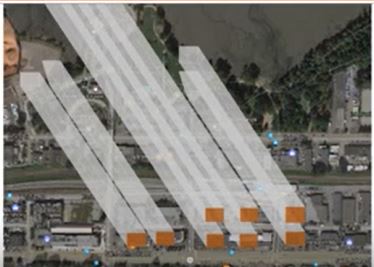 Excerpt below from October 24, 2017, regular meeting of council:

Item 9.1: Moody Centre TOD
“This is not a decision that’s just going to affect the people that live in Moody Centre, this is going to be a decision that affects everybody in Port Moody, and as we’ve noted before, by concentrating development in specific areas of the city, we’re saving other areas of the city. And it’s trade-offs that our residents have to support.
—Councillor Dilworth, near end of video segment 9.1.

Please note: Item 9.1 was under discussion for more than an hour, so the above is a mere snippet. Council debated potential types of housing (condos, rentals, affordable, …), other land uses, free TOD parking for Port Moody residents, and more. Interested parties may find it helpful to review the full discussion.
Video link here:  http://portmoodybc.swagit.com/play/10242017-1660/2/

The Tri-City News provided a summary: Public to weigh in on new vision for Moody Centre, Tri-City News, Oct. 27, 2017

What is the sweet spot for this area, and Moody Centre and the city overall? For land use, population, and building types?

What should Port Moody consider to move forward in the best way possible for the short, medium, and long-term? Give your thoughts to council. MCCA welcomes your comments as well.

Related, on this site:
We’ve posted a great deal of information online on this site with regard to MC TOD and surrounding areas. Some links are included in the information above.

We encourage interested people to use the search function (“TOD” ; “transit hub” ; or other terms) to learn more.

The most recent post was just before the Oct. 24, 2017 council meeting, at which time council agreed to send this matter to public hearing: Density bonusing, Marcon development, Moody Centre TOD, Seaview townhomes proposal, and more

Your input to council is important, for this and other proposals as the city moves forward. See: Aragon proposal back to the drawing board (and the importance of public input). Note: the Aragon proposal is now approved, and though still controversial, has some changes to the original concept that would not likely have occurred without residents speaking out.

1 Response to Public Hearing Nov. 28, 2017: Moody Centre TOD … coming to a neighbourhood near you?