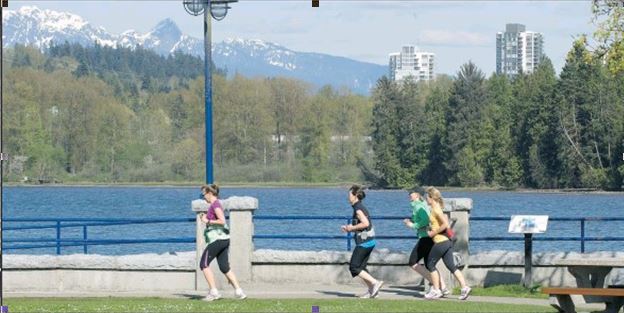 Joggers run along the shoreline of Port Moody’s Rocky Point Park Tuesday. The city is proposing to allow higher density when the Evergreen Line opens in 2016.

Rapid transit is bringing rapid changes to the face of Port Moody.

The 100-year-old community is proposing to approve plans for a sea of highrises when the Evergreen Line opens in 2016.

The proposals have caught some off guard and left others wondering what took so long.

Staff’s draft community plan calls for up to 400 hectares of industrial areas to be designated for things like 30-storey residential towers.

For pro-development individuals such as David Gray, it’s an opportunity to replace old-time lumber yards with a “waterfront village” at the head of Burrard Inlet.

“What is Port Moody’s future? I wish people could get up to 20,000 feet and look at tomorrow. It’s very different from looking over your back yard fence,” said Gray, a spokesman for Mill and Timber, an 11-hectare industrial site which is a candidate for rezoning in the future.

“This is about making Port Moody a seaside community, as opposed to one that happened to be near the sea, but damned if you could get there,” he said. “It’s a bit of a shock for some.”

The city’s population is eventually projected to grow from its present-day 34,500 to more than 60,000.

Hazel Mason, vice-president of the Moody Centre Community Association, says about 200 people have declared their opposition.

“What they’re proposing is stunning. This would be like a mini-West End. I wish I’d never heard of the Evergreen Line,” said Mason, who adds the city’s growth rate is already higher than Surrey’s.

“No one saw this coming. Council campaigned on a program of protecting us from the Evergreen’s pressure to develop. We’re pretty much outraged,” she said.

The proposals would profoundly alter the character of old-time neighbourhoods such as CoronationPark at Ioco Road and the Barnet Highway.

The area is presently home to 1950s-era housing and is among the most affordable in the city, but artist’s drawings show a complete transformation to the glass facades of modern buildings.

Gray claims it is inevitable.

“The word is out. People are moving to the West Coast. What are you going to do with them?” he said.

Residential surveys, available at http://www.portmoody.ca, must be returned by May 10. Public meetings are being held all week.